From Delivery Wiki
Jump to navigation Jump to search

A database of representative radioactive ion beam yields available at ISAC is maintained by the ISAC Radioactive Ion Beam Development group. Unless otherwise noted, the quoted yields have been measured at the ISAC yield station. Rates at experimental locations will be lower, especially for post-accelerated beams.

Post-accelerated beams are limited to those with mass-to-charge ratios less than 30. As most RIB are singly charged from the online source, those with masses of 30 or greater must be charge-bred, generally to A/q < 7 (for transport through the ISAC accelerator chain without stripping after the ISAC RFQ), for acceleration. A tool for identifying candidate charge states and possible stable-beam contaminants is available here. 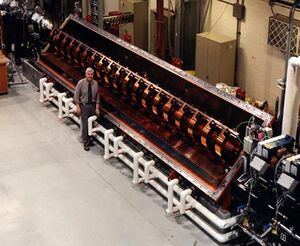 In the ISAC facility we accelerate both radioactive beam produced by the ISAC target stations and stable beam from an off line ion source (OLIS). The first stage of acceleration in ISAC I happens in the RFQ (radio frequency quadrupole). By design an RFQ has a well defined velocity profile where the final velocity is independent from the accelerated ion. The ISAC RFQ is designed to accelerate particles with mass-to-charge ratios less than 30 from an energy of 2.04 keV/u to 150 keV/u. In order to improve the beam quality and transmission we bunch the beam injected into the RFQ by means of a prebuncher. The beam is bunched at the third subharmonic of the RFQ resonant frequency of 35.36 MHz. Bunching at 11.78 MHz means that the time structure after the RFQ is characterized by a main bunch and two small satellites separated each other by 28.3 ns. An 11 Mhz chopper located downstream of the RFQ can kick out of axis the two satellites cleaning the time structure so that only main bunches are present and separated by 84.8 ns. Furthermore the separation between main bunches can be increased from 84.8 ns to 169.7 ns using a second 5 MHz chopper (in this case though half of the beam is lost). The RFQ can be also run without the prebuncher obtaining a time structure of equal populated bunches. Nevertheless this running mode lowers the RFQ transmission from 75% to 25% (see Table 1, below). 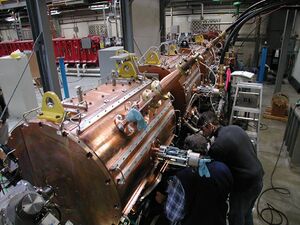 The ISAC-I DTL prior to the installation of x-ray shielding.

After the RFQ the beam charge state is increased by means of a carbon stripping foil and then bunched in time before entering the downstream linac. The efficiency of the stripping depends on the accelerated ions, in general it varies between 30-50%. The second stage of acceleration is accomplished with a drift tube linac (DTL). A DTL is a more flexible machine where the final energy varies within a certain range of energies, depending on the machine design. ISAC DTL operating at 106.08 MHz is divided into eight modules (five accelerating structures and three bunchers) that allow great flexibility on the final energies we can tune. The beam is “rebunched” in time at the DTL entrance by means of the MEBT rebuncher. The DTL accepts ions with mass to charge ratio between 2 and 6 and, depending on the ratio, it accelerates them from 150 keV/u to 1.9 MeV/u (Table 2). The DTL transmits more than 85% of the incoming beam. The beam delivered to the ISAC I experimental stations can be further bunched in time from 4 ns to 1 ns, or in energy from 0.4% to less than 0.1%, by means of a buncher located downstream the DTL; in any case the longitudinal estimated emittance is 1.5 π keV/u ns. For example since the longitudinal emittance is the area of an ellipse in the longitudinal phase space (ns,keV/u) this means that for a bunch of 1 ns full width the energy spread is 6 keV/u. 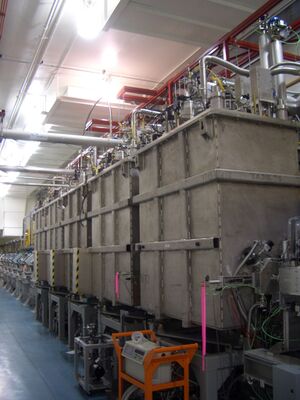 The ISAC II superconducting linac (SC-LINAC) can be considered the third acceleration stage of the ISAC facility. The ion beam at up to 1.5 MeV/u coming from the DTL is injected into the ISAC II linac. The linac is composed of forty superconducting quarter wave (QWR) cavities distributed in eight cryomodules. Each cavity is independently phased and typically run, but not necessarily, at a maximum voltage of ~1 MV. In total the cavities can increase the voltage by upwards of 30 MV. This design provides great flexibility, ultimately allowing any energy between 0.15 MeV/u (drifting the beam from the RFQ with no bunching) and 16.5 MeV/u for an ion with a mass-to-charge ratio of 2 (Table 3). The superconducting linac serves experimental stations (some of them still under construction) located in the ISAC II experimental hall. In the future a superconducting buncher will be installed downstream of the superconducting linac in order to bunch the beam in time or energy at the ISAC II experimental station. At the present for beam energies requiring only a subset of cavities on, the last cavity in the linac can be used to reduce the energy spread.

For both ISAC I and ISAC II experimental stations the standard final spot is usually 2 mm wide, but dedicated optics solutions can be arranged in order to accommodate experiment requests. The measured normalized transverse emittance is 0.2 π mm mrad. The beam characteristics are summarized in Table 4.

The specifications listed below should be considered as starting points when beginning to plan experiments. All values should be confirmed with TRIUMF's Beam Delivery group during the planning process and before requesting beamtime.

*Expected performance. Not yet demonstrated.

Please note that the design specification for the DTL is 1.5 MeV/u. Energies beyond that are not guaranteed. 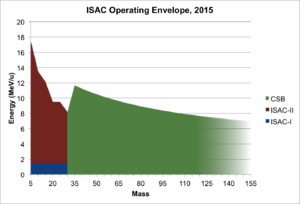 To help Users better plan their experiments, a list of typical time estimates for established tuning procedures is shown below. These estimates should be used by the User to budget the necessary overhead for experimental start-up, energy changes, species changes and other procedures.

In addition, interruptions to beam delivery may occur. Some of these interruptions, such as those due to regular maintenance or proton therapy, are known at the time the Beam Schedule is prepared and scheduled accordingly. Others, such as work in the ISAC Target Hall, may not be known at the time of scheduling but are known on a time scale of weeks in advance. The Beam Delivery group will try to meet with the experimental spokesperson and/or designates prior to the beginning of an experiment to confirm what is required from a beam delivery standpoint and to assist with the preparation of a detailed running plan, taking into account these known, but not scheduled, interruptions. At ISAC, this planning may help a User decide the optimum time for an energy change or a species switch. Totally unplanned interruptions, such as those due to mechanical failures, are unavoidable. Because TRIUMF is a user facility, catering to many external experimenters, it is generally not possible to adjust the beam schedule in response to such interruptions.